Aug. 14 (UPI) — The Justice Department said Tuesday that it has reassigned the warden at the jail where Jeffrey Epstein was found dead Saturday and placed two staff members on leave.

Epstein was being held at a New York City federal jail on charges of sex trafficking of minors over three years in the early 2000s. The 66-year-old multimillionaire previously served a 13-month jail sentence in Florida in 2008 after being charged with similar offenses and registered as a sex offender.

Though his death was called “an apparent suicide,” in a Federal Bureau of Prisons statement, Attorney General William Barr has ordered an investigation by the FBI and inspector general.

“Epstein’s death raises serious questions that must be answered,” Barr said in a statement.

Barr has cited “serious irregularities” at the Metropolitan Correctional Center in Manhattan. He also denounced jail officials’ “failure” to secure him, and on Tuesday, he called for a new warden.

Barr “directed the Bureau of Prisons to temporarily assign” warden Lamine N’Diaye to a regional office, pending investigations into Epstein’s death, the Justice Department said in a statement.

Two staffers who had been assigned to Epstein’s unit have also been placed on administrative leave, the department said. 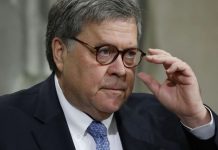