She issued the dissent Thursday after a Supreme Court order declined — for the second time — to send the abortion case back to the trial judge in Texas, which may have provided some leeway for abortions.

Sotomayor was joined by fellow Justices Stephen Breyer and Elena Kagan in the scathing dissent.

“This case is a disaster for the rule of law and a grave disservice to women in Texas who have a right to control their own bodies. I will not stand by silently as a state continues to nullify this constitutional guarantee,” she wrote.

She described the abortion ban, known as S.B. 8, as a ‘bounty hunter scheme.’

“The law immediately devastated access to abortion care in Texas through a complicated private bounty-hunter scheme that violates nearly 50 years of this Court’s precedents,” she wrote.

Abortions after about six weeks of pregnancy have been banned in Texas since Sept. 1. The law has a unique enforcement mechanism that allows private citizens to bring lawsuits against anyone who “aids and abets” in a prohibited abortion, making it extremely difficult to challenge in court.

In December, the U.S. Supreme Court threw out most of the arguments against the law, but allowed a narrow challenge to proceed against medical licensing officials. It is that narrow challenge that abortion providers were hoping would be allowed to play out in district court. 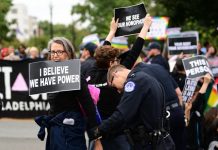