Sept. 7 (UPI) — Tropical Storm Kay strengthened into a hurricane early Tuesday, the eighth of the East Pacific basin’s hurricane season, as it neared the Mexican coast.

In its 9 p.m. MDT advisory Tuesday, the National Hurricane Center said Kay was about 260 miles south-southwest of the southern tip of Baja California. It had maximum sustained winds of 90 mph, an increase in speed from a few hours earlier, and was moving northwest at 13 mph.

A storm becomes a hurricane when sustained winds hit 74 mph.

The NHC said that Kay could become a major hurricane — one at Category 3 or higher — sometime on Wednesday. A hurricane reaches Category 3 strength when it has maximum sustained winds of 111 mph or greater.

The storm is projected to make its closest approach to the shoreline of Baja California Thursday and Friday. It could move near areas of Southern California early next week, depending on its path.

“Weakening is forecast to begin by Thursday, but Kay is forecast to remain a strong hurricane when it passes near the Baja California peninsula,” it said.

Kay became a hurricane after slowly gaining wind intensity off the southwest coast of Mexico on Monday. As a tropical storm, Kay had already brought impacts to the Mexican coastline.

As the system continues to organize and gain wind intensity, it is expected to be at its peak strength by midweek as it tracks toward the peninsula. 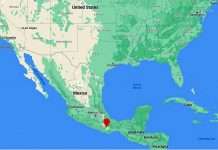