Dec. 16 (UPI) — A Kenyan national was indicted in federal court Wednesday after prosecutors accused him of going through flight training in the Philippines to conduct a 9/11-style attack in the United States.

Authorities say that Cholo Abdi Abdullah, 30, was a member of the African al-Qaida-linked group al-Shabaab and was taking orders directly from one of its commanders. Abdullah is charged with multiple criminal counts related to his alleged plot and support for the terror group.

He entered a not guilty plea in his appearance Wednesday. Abdullah was initially arrested in July 2019 in the Philippines and transferred to U.S. law enforcement officials Tuesday.

“As part of a terrorist plot directed by senior al-Shabaab leaders, [Abdullah] obtained pilot training in the Philippines in preparation for seeking to hijack a commercial aircraft and crash it into a building in the United States,” Acting Manhattan U.S. Attorney Audrey Strauss said in a statement.

“This chilling callback to the horrific attacks of Sept. 11, 2001, is a stark reminder that terrorist groups like al-Shabaab remain committed to killing U.S. citizens and attacking the United States,” Strauss said.

New York Police Commissioner Dermont Shea said Abdullah had obtained pilot training and started plotting the hijacking, “but the outstanding work of our NYPD detectives and federal agents of the FBI’s New York Joint Terrorism Task Force, along with all of our law enforcement partners, put an end to those plans and ensured that no one would be harmed.”

Authorities said Abdullah had started to research how to obtain and U.S. visa along with skyscrapers as possible targets but it was not clear which ones he had viewed. 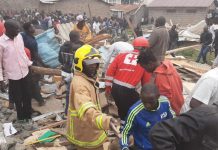