At a Nairobi news conference Tuesday, Odinga called for “economic boycotts,” questioned statistics provided by Kenya’s Independent Elections and Borders Commission and announced he would form a forum that would encourage public debate of issues facing the country and pass resolutions.

“A president who is elected in an election that does not comply with the constitution cannot legitimately and constitutionally exercise authority on behalf of the people,” Odinga said, according to a speech transcript published in the Daily Nation. “If the election is allowed to stand, the highest office in the land will be occupied by a person who has usurped power.”

The elections commission certified Kenyatta’s victory Monday in an election earlier this month. Kenyatta previously won a disputed August election, which Kenya’s Supreme Court later nullified because of irregularities, blaming the commission for the mishap. It also called for a new election to be held within 60 days.

Odinga was the main opposition leader running against Kenyatta in that first election. Before the vote this month, though, he dropped out of the race, saying that he didn’t see enough reform.

“If this sham election is allowed to stand, what will stop the regime from conducting sham referenda to remove the constitutional provisions that they do not like? Nothing,” Odinga said. 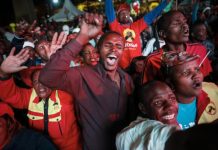 Kenyan president vows to ‘fix’ judiciary that invalidated his election 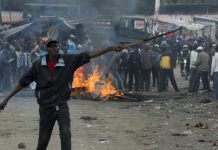