GRAYSON, Ky., Sept. 6 (UPI) — Hundreds of protesters gathered outside the Carter County Detention Center on Saturday to offer support for Kim Davis, the county clerk in Kentucky who was held in contempt of court for violating federal law by refusing to issue marriage license to gay couples.

Davis was jailed Thursday when she told a judge she would not issue the licenses because of her Christian beliefs. The Supreme Court legalized gay marriage nationwide in a June ruling that requires all counties to issue licenses to couples who apply for one.

About 300 people stood outside the jail holding signs and chanting their support for Davis’s refusal to grant marriage licenses to gay couples. The signs depicted her as a hero upholding Christian beliefs, carrying messages that included “We ought to obey God rather than man” and calling Davis’s arrest for violating the Court’s ruling as “unlawful tyranny.”

“It’s very clear that what this did was open up a Pandora’s box for an attack against Christianity and tolerance is only going one way and that’s toward the other side,” Ohio-resident Stephanie Hunley told NPR after driving more than two hours to be at the rally. “Bible-believing Christians, we don’t check our conscience at the door when we leave home. If you’re a true believer in Jesus Christ that belief system will carry through 24/7.”

Protesters were asked to fast in support of Davis by one speaker at the rally, as well as pray and be ready for war against religious oppression.

Davis was jailed Thursday when she refused an order by U.S. District Judge David Bunning to begin issuing the licenses. Bunning said she would remain in jail until she complies with the law.

“She won’t bow, I promise you,” Davis’ husband, Joe, told the crowd, according to CBS News. “She sends her love to each and every one of you all. And this is what she said, ‘All is well. Tell them to hold their head high because I am.'”

Deputy clerks in Davis’s office began to issue licenses to gay couples Friday after Bunning ordered them to begin doing so.

While questions remain as to whether the licenses are valid without the signature of Davis, the elected county clerk, couples received them and told reporters they planned to get married. 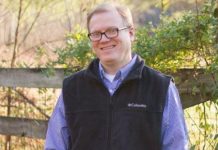 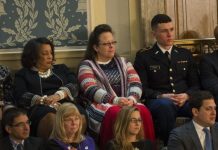 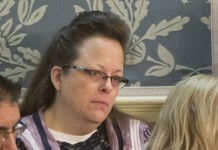