According to a pool report, the performance began at 6:20 p.m. local time, at the East Pyongyang Grand Theatre located in the North Korean capital, after the schedule was adjusted twice to accommodate a large amount of people.

The North Korean leader appeared to have enjoyed the two hour-long concert, having said that the two Koreas should hold cultural performances more often.

He reportedly suggested holding another cultural event in Seoul around fall.

Kim’s sister Kim Yo-jong and the North’s nominal head of state Kim Yong-nam was also among the audience, the pool report said.

Eleven South Korean singers and bands performed some of their biggest hits as well as traditional folk songs, under the two-hour program titled “Spring is Coming.”

The musicians are scheduled to hold a joint show with North Korean artists at the 12,000-seat Ryugyong Jong Ju Yong Gymnasium on Tuesday.

The two Koreas agreed last month that the South would send a 190-member arts troupe to Pyongyang, including the high-profile musicians, 20 taekwondo practicioners and technical staff.

The last South Korean performance in the North was held in 2005, when Cho Yong-pil held a solo concert in Pyongyang.

Culture Minister Do Jong-whan, who led the delegation, told reporters Saturday that he hopes the performances will contribute to expanding cross-border exchanges, which recently began on the occasion of the Pyeongchang Winter Olympics in February.

“Our mainstream artists and I will do our best to make a success of the historic concerts in Pyongyang, which are the first in 13 years [to be held by South Koreans],” he said in a statement.

Do added that he will meet with North Korean officials during his four-day trip to expand cooperation. Before the concert was held, the troupe’s taekwondo demonstration squad showcased their moves at the 2,300-seat Pyongyang Taekwondo Hall.

Under the theme, “Spark,” the South Korean martial artists performed the two-part demonstration from 4:30 p.m. 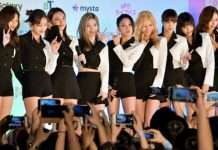