Sept. 24 (UPI) — A referendum in the Kurdish region on succession from Iraq will go on, Kurdistan Region President Masoud Barzani said Sunday, despite growing tensions.

“We ask what is the problem if the Kurdish people have right to express their will? Only through independence we can secure our safety,” Barzani told reporters at a news conference in Erbil.

“The Kurdish referendum is only a first step for now and it is not to redraw borders or impose status-quo on Baghdad,” he said.

He said that years of “harmful practices in the capital” prompted them to conduct the referendum.

Barzani said the 200,000 Kurdish fighters, called the Peshmerga, will continue to work with the Iraqi army and the international coalition fighting against Islamic State.

In eastern Iraq, hundreds demonstrated against the planned referendum, waving banners outside the Baquba city council that urged local authorities to ban the polls.

But billboards noted: “the time is now — say ‘yes’ to a free Kurdistan!”

The United States, Turkey and the United Nations have spoken out against the referendum, saying it would stir regional ethnic and sectarian conflict.

On Sunday, the U.S. embassy in Baghdad cautioned “U.S. citizens in Iraq that there may be unrest if the Kurdistan Regional government carries out an independence referendum.”

The semi-autonomous Kurdish region has a population of 5.2 million people. The referendum includes areas under Kurdish control and territories disputed between Erbil and Baghdad.

About 30 million Kurds are spread across Turkey, Iran, Iraq and Syria.

More than 5.2 million people are registered to vote.

Tens of thousands of flag-waving Kurds packed a stadium in Erbil, the Kurds’ capital, on Friday, chanting “Bye-bye, Iraq!”

“It’s like you are a bird in a cage that has food brought to it,” Mahdi Ahmed Hamza, 49, a school headmaster said to The New York Times. “But only when you are able to fly away do you discover that you are able to feed yourself.”

In the Kurdish province of Kurkuk, four Iraqi Kurdish soldiers were killed in an explosion Saturday.

Also, seven other Kurdish Peshmerga troops were injured in the blast 155 miles north of the capital Baghdad. 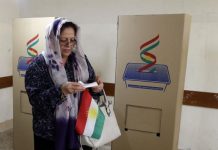 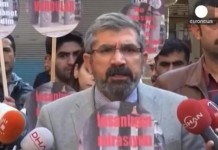