April 2 (UPI) — The Los Angeles Police Department has identified a suspect wanted for the murder of the Grammy-nominated rapper Nipsey Hussle.

Eric Holder, 29, is wanted for homicide in the shooting death of Hussle, whose real name is Ermias Asghedom, the police department said in a statement Monday night.

The suspect was last seen fleeing the scene in a 2016 white, four-door Chevy Cruze, police said, adding that anyone with information about his whereabouts is to contact the South Bureau Homicide Division of the LAPD.

The shooting occurred at about 3:20 p.m. Sunday, when Holder allegedly walked up to Hussle and two others standing outside the rapper’s clothing retail store in Hyde Park and fired multiple shots, striking the three victims who fell to the ground.

Holder then allegedly ran to a nearby alley, where he entered the white Chevy Cruze by its passenger side, which was driven by an unidentified female, the LAPD said.

Hussle and one of the victims were transported to the hospital where the musician was pronounced dead.

The Los Angeles County coroner’s office confirmed Monday Hussle’s cause of death was gunshot wounds to the head and torso.

“Detectives have worked tirelessly and are now asking for the public’s help in locating the suspect in this case,” the LAPD said in the statement.

The identification of the suspect comes as 19 people were transported to the hospital, two in critical condition, after fears of another shooting caused the hundreds gathered for a vigil to the late rapper to flee the area, Los Angeles Fires Department spokeswoman Margaret Stewart said.

Most of the injuries were caused by people being trampled when the crowd rushed from the scene, she said in a statement.

The two critical injuries were the result of one person fleeing the scene getting hit by a vehicle while the other person suffered a “penetrating, traumatic injury with cause unknown,” she said.

LAPD Chief Michel Moore confirmed on Twitter rumors of shots fired during the vigil “do not appear to be accurate.”

He said the majority of the attendees had left the strip mall and officers would remain at the scene.

“Our appreciation to those from our community actively working with members at the vigil to quell violence. Their work is vital,” he said. 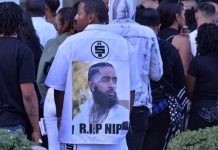 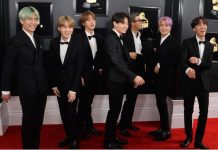 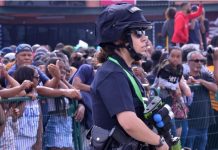 1 dead, 3 hurt in gunfire after Nipsey Hussle memorial in LA