On Friday night it intensified into a Category 3 storm.

In its 11 p.m. EDT update, the National Hurricane Center said the eye of the storm was located about 785 miles east-northeast of the northern Leeward Islands and about 1,135 miles southeast of Bermuda. It had 125 mph sustained winds and was moving northwest at 12 mph. Hurricane force winds extend outward up to 70 miles, it said.

The hurricane was not near land and no warnings or watches were in effect.

Larry is expected to remain a major hurricane through the middle of the week but little change in strength is forecast during the next few days, though fluctuations in intensity will be possible.

“Swells generated by Larry are reaching the Lesser Antilles and are expected to spread westward to portions of the Greater Antilles, the Bahamas and Bermuda on Monday and Tuesday,” the NHC said. “Significant swells should reach the east coast of the United States and Atlantic Canada by midweek.”

The swells are forecast to cause life-threatening surf and rip current conditions. 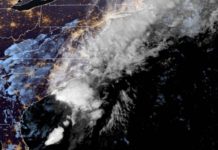