DENVER, March 11 (UPI) –Data collected by shooting laser beams from an airplane at hills in the Pacific Northwest is helping identify life-threatening mudslides, showing where existing homes and future development might be at risk.

In Washington and Oregon, where steep bluffs are saturated by rain every winter, state geologists are using a tool called Lidar, short for light detection and ranging, to understand the topological surfaces of local geology.

“Part of the problem with mapping our topography is we’ve got crazy dense vegetation that hides a lot of stuff,” Washington Department of Natural Resources spokesman Joe Smillee said. “Lidar has let us see through that.”

Lidar data analysis has enabled state geologists to identify areas that show evidence of sliding earth so that new homes won’t be built in high-risk zones.

Smillee added, “We work really closely with county planning departments and emergency management folks, so when they get a request to build [developers] can check with the county.”

Knowing the geological history of a mountain can help analyze risk. Past mudslides are among the best indicators of future mudslides, said Ben Mirus, landslide hazards geologist for the U.S. Geological Survey.

In 2014, 43 people were killed in the Stillaguamish Valley of Oso, Wash., when, within one minute, a massive mudslide traveling at 40 mph dropped 18 million tons of sand, glacial boulders and clay from the North Fork Stillaguamish River, burying some 40 homes in the Steelhead Haven neighborhood.

One resident described her injuries as being “hit by a tsunami of mud and carried hundreds of yards buried in debris,” according to a lawsuit filed against the county, the state Department of Natural Resources and a logging company.

Research showed the Hazel landslide had deposited debris down the hill numerous times, including in 1942, 1949, 1951, 1967, 1988, 1996 and 2006. Hillside logging above the river and heavy rainfall also might have contributed to the conditions that led to the enormous mudslide, according to the lawsuit.

After the 2014 disaster, an investigative commission led by Gov. Jay Inslee approved funds for the state to hire multiple landslide hazard geologists and use Lidar to identify mudslide risks in the state.

Lidar uses sensors that detect the reflections of a pulsed laser beam. The reflections are collected in a data “point cloud” that records and displays 3D objects on the surface of the Earth. Analysis can scrub out all the data signals for vegetation and human-built objects, leaving the bare topography.

Landslides, rock-falls, mudslides and debris flows are related events that involve a collapse of soil, mud or boulders from steep topography, according to the U.S. Geological Survey. They can be caused by seismic activity or a change in vegetation from a wildfire, heavy precipitation or human activity.

Outside Seattle, in the foothills of King County, the human development footprint is expanding as a result of a housing squeeze and pressure from developers to build luxury homes on buffs that face the ocean. Lidar data has revealed new areas in the foothills where past mudslides occurred, the state’s Smillee said.

Seattle even has a mudslide risk website, run by the U.S. Geological Survey and the National Weather Service. It measures rainfall and water content of soil along the city’s bluffs to predict if the risk is increasing for a landslide.

Washington and Oregon partnered to release a booklet for homeowners to recognize signs of a potential mudslide. The land might be slowly moving and ready to slip away if trees appear to be growing at bent angles, or utility pole wires are unusually taught or loose.

Homeowners should look for cracks in the walls or floors, nails popping out or windows and doors that don’t shut correctly, the booklet says.

In nearby Oregon, state geologists are farther along in mapping Lidar topography data across the state to find of mudslide risks.

“In Oregon, it’s after high-rain events — the larger storms — that could be a concern for risk of a landslide,” said Bob Houston, spokesperson for the Oregon Department of Geology and Mineral Industries.

Oregon’s Lidar topography data even can indicate landslides that happened more than 150 years ago, as well as large, ancient landslide scars that might be invisible to the naked eye.

“We provide the hazard information to local decision-makers to have conversations about development,” Houston said.

Mudslide season is expected along the Oregon coast, especially after a wet winter and spring.

A mudslide Feb. 9 washed out a road, broke the water main and swept away ocean bluff trails at Ecola State Park on the Oregon coast after two months of hard winter rainstorms, park rangers said.

“With more rain than normal you get really saturated soils, and the water travels through the soil, until it hits a layer of sandstone it can’t penetrate,” said Bo Ensign, ranger supervisor for the Oregon Parks and Recreation Nehalem Bay management unit. “It’s a bit dramatic. There’s about 100-foot-long section of trail that’s no longer there.”

But shifting soil and mudslides are part of the region’s geology, he said.

“When you see the offshore rocks, you know they were part of the mainland at one time, and new headlands have formed by the uplifting of oceanic plates,” Ensign said. “Stuff’s always moving. It’s not really stable on the coast.” 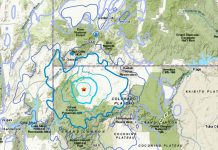 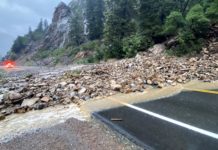