July 4 (UPI) — A fountain of lava at Hawaii’s Kilauea Volcano created a swirling whirlwind to mark two months since it began erupting on the Big Island.

The spatter cone was 180 feet tall at its highest point.

The USGS captured on video a whirlwind of lava from the fissure June 30. The video was released Monday. The latest explosion registered as a 5.3-magnitude earthquake with an ash plume reaching about 1,200 feet.

More than 1,200 lightning strikes linked to the volcano were recorded between 7 a.m. and 2 p.m. Monday, the National Weather Service reported.

The eruption of Kilauea, which is Hawaii’s most active of the state’s five volcanoes, has caused more than 4,000 earthquakes and has covered 10.2 square miles of land. according to data from the Hawaiian Volcano Observatory. It began on May 3.

Fissure 22 is spewing lava from a conical spatter and feeding a short flow to the northeast along the edge of earlier flows.

Fissure 22 is showing the most activity in recent weeks.

“It’s something to watch,” Rick Hazlett, associate researcher at the USGS Hawaiian Volcano Observatory, said to Hawaii News Now. “As we all know, things can change. But as I say, it hasn’t stolen the energy and the volume of lava from the Fissure 8 vent that would otherwise make this a big concern.”

Hawai’i County Mayor Harry Kim on Monday declared a state of emergency for at least the next 60 days and expanded an earlier supplementary emergency proclamation related to real property tax assessments for areas of lower Puna. 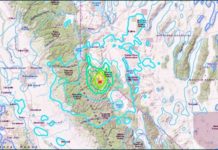