Jan. 24 (UPI) — A San Francisco television station has reported it’s obtained a letter that may have been written by one of three inmates who escaped from Alcatraz more than a half-century ago — in what was one of the most notorious jailbreaks in U.S. history.

The letter, which KPIX-TV acquired from a source, was purportedly written and sent to San Francisco police by escapee John Anglin five years ago.

Anglin, his brother Clarence and Frank Morris broke out of their cells on the night of June 11, 1962, and were never seen again. For decades, the prevailing theory has been that the men drowned in San Francisco Bay. Their bodies, though, have never surfaced.

The U.S. Marshals Service and FBI looked into the letter when it was sent in 2013. The FBI ran lab tests on the paper, looking for traces of fingerprints or DNA, but they were inconclusive.

The Marshals Service, the only agency that still has an active investigation in the case, said it has doubts about the letter’s authenticity.

“There is absolutely no reason to believe that any of them would have changed their lifestyle and became completely law abiding citizens after this escape,” the agency wrote in a statement to KPIX-TV.

The letter writer claims to be John Anglin and says he is “83 years old and in bad shape.”

“I have cancer,” it states. “Yes we all made it that night but barely!”

“If you announce on TV that I will be promised to first go to jail for no more than a year and get medical attention, I will write back to let you know exactly where I am,” the letter continued. “This is no joke.”

According to the FBI, the men crawled through holes in their cells they dug out and climbed up pipes to an unguarded space on an upper level, where they set up a workshop to build essentials for their escape — including a makeshift raft, life jackets and dummy heads to fool guards during inmate head counts.

The heads were made of plaster, paper mache, paint and real human hair.

From their workshop area, the men climbed onto the roof and scaled down the prison walls. It’s believed they inflated the raft and entered the bay’s rough waters.

If the men survived, they would be the only inmates ever to successfully break out of the infamous island prison.

The escape was covered extensively in 1962 and the incident continued to receive attention in the decades that followed. Clint Eastwood portrayed Frank Morris in the 1979 film Escape From Alcatraz — and two years ago, a History Channel documentary presented possible evidence that the Anglins survived the escape and fled to Brazil. 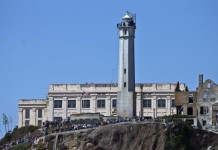