LONDON, Nov. 14 (UPI) — Gatwick Airport reopened its north terminal Saturday, hours after thousands of passengers were evacuated when a man was seen discarding what appeared to be a firearm.

A 41-year-old man from Vendome, France, with a suspected firearm was arrested about 9:30 a.m. local time after he was spotted acting suspiciously. Sussex Police said the man was at a pre-screening area when he was taken into custody. He had not checked in or passed through any passport or security checks. Police found “personal items and what appears to be a firearm” in connection to the incident. Police said, “the viability of the weapon has yet to be established.”

“The man is being interviewed as we try to determine the circumstances of the incident, but at this time it is too early to say what his intentions, if any, were,” Sussex police Detective Superintendent Nick May said. “However, given the events in Paris on Friday evening, there is heightened awareness around any such incident and it is best that we treat the matter in all seriousness.”

At least 128 people were killed in coordinated attacks at several locations in Paris on Friday night. The Islamic State militant group claimed responsibility.

“Following a full and thorough search by the police, we are now able to re-open our north terminal to passengers,” airport officials said. “Our priority is always the safety and welfare of our passengers and extra Gatwick staff are on hand to assist those who have experienced significant disruption to their journey today. We are working with our airlines to return north terminal to usual operations. South terminal is operating as normal.”

Evacuees took to social media, describing the scene as “quiet chaos” with hundreds of people corralled and “lots of men with guns and police.” Gatwick is London’s second busiest airport and is located about 30 miles from the capital.

Emma Goodson was traveling from Malaga, Spain to Gatwick. Goodson told UPI she expected to land at the north terminal but instead landed at the south terminal.

“No reason given but saw news about man with machine gun & grenade,” she said.

Scenes of quiet chaos at #Gatwick lots of men with guns and police#evacuatedfromnorth pic.twitter.com/dUYbpfMaMM 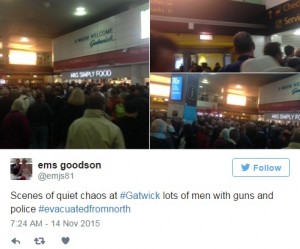