The couple agreed to move forward with the shared legal team despite a warning from the Boston judge that doing so constitutes a “potential” and actual “conflict of interest.”

The process takes place to ensure that defendants are aware of any possible conflicts ahead of the trial so that said conflicts can’t be used as grounds for a possible appeal later.

Both Loughlin and Giannulli are being represented by the law firm Latham and Watkins LLP, which previously represented the University of Southern California, the school the couple is accused of attempting to defraud, in an unrelated case.

The judge explained the possible consequences of sharing the same lawyers, stating the only way to ensure they receive the best legal advice is to know that their attorneys are loyal “to you and you alone.”

Loughlin and Giannulli pleaded not guilty in April to charges they paid more than $500,000 in bribes to secure their daughters’ admissions to college.

The case is one of several involving 50 prominent parents, athletic coaches and others accused of orchestrating bribes to ensure admissions into prestigious universities such as Stanford and Yale. 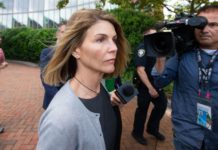