Landry said after a “thorough and exhaustive review of the facts,” his office could not prosecute officers Howie Lake or Blane Salamoni — finding their actions were “well-founded and reasonable.”

“This decision was not taken lightly. We came to this conclusion after countless hours of reviewing the evidence,” Landry said.

Sterling had been selling CDs and DVDs outside a Baton Rouge convenience store when he was shot. Known as the “CD man”, his killing renewed “Black Lives Matter” protests across the nation.

Salamoni shot Sterling six times outside the store on July 5, 2016. He said Sterling reached for a gun in his pocket during a struggle, which was recorded on video.

Landry said on Tuesday that Salamoni had asked Lake to subdue Sterling with a stun gun, but it had little effect. They attempted to stun him one more time before Salamoni tackled him.

Landry said Sterling’s toxicology report indicated the 37-year-old had “several” drugs in his system, and added it was “reasonable to believe that Sterling was under the influence, and that contributed to his noncompliance.”

Abdullah Muflahi, the owner of the Triple S Food Mart where Sterling was shot, also filed a lawsuit against the Baton Rouge Police Department in 2016 — alleging that he was unlawfully detained and that police illegally confiscated his cellphone and the store’s entire security system, which recorded the killing of Sterling. 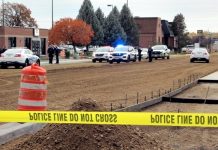