April 25 (UPI) — Authorities launched a nationwide manhunt Wednesday for a man suspected of killing a sheriff’s deputy in Maine before stealing his police cruiser and fleeing.

“We have lost an outstanding deputy today who has served with great distinction for the last 13 years,” Lancaster said during a news conference. “He was one of the finest deputies you would want to meet.”

Williams, a resident of Madison, Maine, was scheduled to appear in Haverhill District Court for a probable cause hearing on weapons and ammunition charges Wednesday morning, officials told the Boston Herald. He was free on $5,000 bail.

Maine State Police believe Williams killed Cole around 1 a.m. or 2 a.m. in Norridgewock. They said Williams drove the marked cruiser to another location in Norridgewock where he committed a theft and abandoned the vehicle.

“Presently, a manhunt is underway. We have issued a nationwide alert,” Maine State Police said. “At this time, there is no vehicle associated with Williams. This is an active and fluid investigation.” 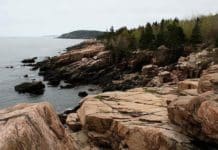