Strong winds from the category 5 Cyclone Winston caused severe damage across the island nation, prompting the government to declare a month-long state of disaster and put residents under a curfew until 5:30 a.m. Monday.

Officials were trying to establish communications and road access to the hardest-hit areas and said they would not know the full extent of the damage and injuries until then, weather.com reported.

“Winston was a monster of a cyclone,” Fiji resident Nazeem Kasim told CNN. “I have not experienced anything like this before in my life, nor has my 60-year-old father.”

Nadi International Airport will open for passengers Monday, once the curfew is lifted. Tourism Minister Faiyaz Siddiq Koya said all tourists were safe and there was no significant damage to most major hotels on the main island.

BBC reported the Fiji government opened about 750 evacuation centers following the powerful cyclone. Upwards of 1,000 people were sheltering in one of those evacuation centers on the second largest island of Vanua Levu, north-east of Viti Levu, the Fiji Broadcasting Company reports.

An elderly man was among the victims. He died on the smaller Koro Island when a roof fell on him. The BBC said some villages reported all homes had been destroyed, Jone Tuiipelehaki with the UN Development Program tweeted after the storm hit. 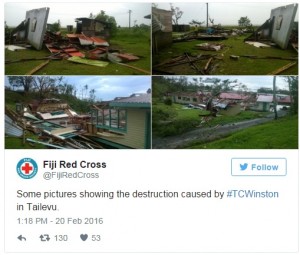 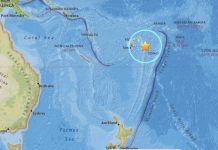 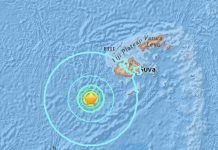 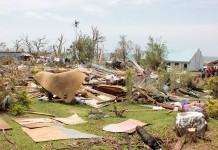