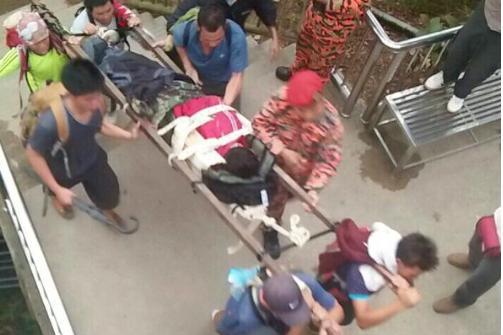 BORNEO, Malaysia, June 6 (UPI) — Officials said more than a dozen people are dead and several others are still missing following a powerful earthquake that struck at a Southeast Asian mountain on the island of Borneo in Malaysia.
[one_fourth]

[/one_fourth][three_fourth_last]
Saturday, Ranau police chief Mohammad Farhan Lee Abdullah said 13 have so far been confirmed dead and six remain missing in the aftermath of the 6.0 magnitude earthquake. They said 11 bodies were found Saturday and two Friday.

Mountain guides helped more than 150 climbers to safety early Friday after the quake left them stranded atop Mount Kinabalu, a 13,500-foot peak in the Malaysian part of the island. It was the strongest earthquake to strike the island in decades, officials said.

Two of those confirmed dead were Rubbi Sappingi, a 30-year-old mountain guide with Amazing Borneo Tours, and Rachael Ho Yann Shiuan, 12, of Singapore. Some of the missing are students and teachers from a Singaporean primary school, Singapore’s Minister of Education Heng Swee Keat said on Facebook.

Australian climber Vee Jin Dumlao, who was among those rescued, said she and other climbers had to wait nine hours for help.

“Fog was quoted as the reason for not rescuing the climbers, that was certainly true earlier in day. But the sky cleared beautifully and the air was still by 4:00 p.m.,” Dumlao told the Australian Broadcasting Corporation.

Dumlao called the rescue operation “a farce,” and claimed rescuers told the group they would not be lifted out until the next day — despite the clearing weather.

“At 4:30 p.m., it was decided that even though the tremors were still continuing, they were not as strong and we just had to take the risk and make our way down the mountain with the guides’ help,” she said.

Sabah Deputy Chief Minister Tan Sri Joseph Pairin Kitingan issued a warning to those climbing Kinabalu to respect the sacredness of the mountain, which is a global attraction for climbers.

Officials said climbers from 16 countries had been on the peak when the earthquake struck — including 117 Malaysians, 38 Singaporeans, five Americans, four Dutch, three British, two French and two Australians.

Tourists from Belgium, Thailand, the Philippines, Kazakhstan, India, New Zealand, South Korea, Denmark and China were also on the mountain, the ABC reported.

The U.S. Geological Survey said the quake’s epicenter was east of Kota Kinabalu, the capital of Sabah, and near the mountain.

No major damage has been reported, and authorities have indefinitely halted all climbing on Mount Kinabalu.