Jan. 21 (UPI) — Authorities arrested and charged a Connecticut man they said was responsible for crushing a Metropolitan Police officer in a doorway during the U.S. Capitol riot, federal prosecutors said Wednesday.

He was arrested Tuesday.

Federal prosecutors filed an affidavit in U.S. District Court for the District of Columbia saying video footage shot by participants in the riot and by body-worn cameras of officers show McCaughey at the front of a group of people trying to push their way into the Capitol building.

In the videos, the crowd appears to be rocking back and forth, attempting to push past a line of officers with riot shields. A glass doorway stands between the two groups, with the rioters pushing against a partially open door, crushing officer Daniel Hodges between it and the door frame.

Hodges screams in pain during the turmoil, and appears to be bleeding from his mouth.

“The vicious attack on officer Hodges was abhorrent and quintessentially un-American,” acting U.S. Attorney Michael Sherwin said of the attack.

“It is my pledge that anyone involved in violent attacks on law enforcement at the U.S. Capitol on January 6 will be prosecuted to the fullest extent of the law. McCaughey’s alleged actions were an assault on officer Hodges, the Capitol and the rule of law itself.”

In New York City, police arrested Samuel Fisher, also accusing of him participating in the Capitol attack. Authorities said he allegedly posted photos of himself with firearms he took with him to Washington, D.C.

Prosecutors said his social media posts indicated he was prepared to engage in violence at the Capitol riot.

“We must stand up to these people and take our world back,” he wrote in a December post.

Finally, Joseph Biggs, who describes himself as an organizer for the Proud Boys, was charged Wednesday with three counts, including unlawful entry and disorderly conduct.

Federal prosecutors said the Florida man was seen in videos and photos taken at the Capitol riot, and he allegedly entered the Capitol building.

An affidavit said he and other members of the Proud Boys planned to attend the siege without wearing their normal black and yellow clothing so they could blend in with the rest of the crowd. 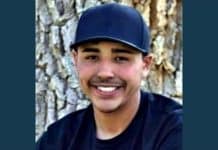