Jurors required less than 90 minutes Monday to find the former teaching assistant guilty of kidnapping resulting in a death and two counts of lying to investigators. The same jury will decide July 8 if he should receive the death penalty.

During a news conference following the verdict, Zhang’s mother broke down in tears.

“We have missed Yingying tremendously in the past two years,” her father, Ronggao Zhang, said in a statement. “As of today, we could still not imagine how we will live the rest of our lives without her. There is no language that can describe our pain and suffering.”

The trial will hopefully bring them justice, he said, adding the family’s wish is to find her body and return her to China.

The verdict came as little surprise given that the defense admitted in its opening statement that Christensen, 29, did kill Zhang, who was a visiting scholar from China at the university.

“He has been planning and fantasizing about that moment for months and now, here he was actually doing it — raping and murdering another human being, not that he actually viewed her as a human being,” Miller said in his closing arguments.

Zhang, 26, was last seen June 9, 2017, when she was observed on security camera video entering the passenger seat of Christensen’s black Saturn Astra as she was running late to sign a lease for an apartment.

Despite his defense’s opening statement, Christensen pleaded not guilty.

During the trial, a recording made by Christensen’s former girlfriend, Terra Bullis, at the request of the FBI was played and Christensen could be heard saying Zhang was one of 13 victims and that he had decapitated her after beating her with a baseball bat.

He also said he would not reveal where her body was.

“No one will ever know where she is,” Christensen was heard saying on the tape. “She’s gone forever.” 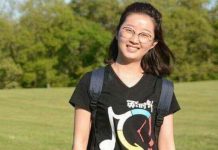