Aug. 1 (UPI) — One person was killed and several others were injured when bees from a 100-pound beehive stung people in an Arizona neighborhood.

At least six people were stung multiple times, including three firefighters. One of those firefighters was stung nearly 60 times and taken to a hospital for evaluation. He was released later on.

One man died from bee stings but details haven’t been released yet.

Crews were dispatched around noon on Thursday to Marana. Bee handlers killed most of the bees and removed the hive later in the day, police told NBC News.

Bee swarms are a regular occurrence in Arizona, according to The Guardian. One man survived 500 to 1,000 stings after disturbing a hive in 2015.

“Stinging incidents by Africanised honeybees occur when the actual nest site, not the swarm, is disturbed,” the center stated on its site. 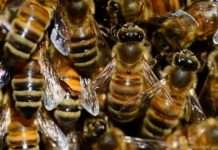