Aug. 17 (UPI) — The jury in the trial of President Donald Trump‘s former campaign chairman, Paul Manafort, ended its first day of deliberations Thursday without a verdict.

The jurors sent a note to Judge T.S. Ellis around 5 p.m. asking four questionsabout the the trial in which Manafort faces 18 tax and bank fraud charges for allegedly hiding millions of dollars from the IRS in overseas bank accounts.

Jurors asked if the judge could define the term “shelf company” and whether they could receive an updated exhibit list that would connect evidence to corresponding charges. The judge denied both requests and instructed the jurors to rely on their collective memories of the testimonies.

Manafort’s business associate, Rick Gates, testified they used shelf companies that were previously created by a lawyer in Cyprus. The companies acted as if they “are already on the shelf” for another person to use to access foreign bank accounts without having to create a new company.

The jury also asked the judge if a person is required to file an FBAR form — a requirement for people with foreign bank accounts greater than $10,000 — if they owned less than 50 percent of the account.

Ellis replied by reading the legal instructions he provided Wednesday, which stated people who control more than 50 percent of a company with foreign bank accounts must file FBARs if they control “disposition of money, funds, or other assets held in a financial account by direct communications.”

Manafort’s lawyers said he may not have believed he was required to file the form, as the companies were set up through his Ukrainian political consulting firm, DMP International, which he owned equally with his wife.

Lastly the jury asked the judge to “redefine reasonable doubt,” which Ellis clarified as “a doubt based on reason,” adding the government “is not required to prove guilt beyond all possible doubt.”

Jurors also were shown photos of high-end clothes, including a $15,000 ostrich jacket and $18,000 python jacket Manafort purchased with the funds.

The jury is scheduled to continue deliberations at 9:30 a.m. Friday. Defense attorney Kevin Downing said the first day of deliberations was “overall, a very good day for Mr. Manafort.” 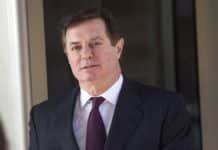