Williams is accused of killing Cpl. Eugene Cole, a 13-year veteran of the Somerset County Sheriff’s Office, and then driving Cole’s marked cruiser to another location in Norridgewock, where he committed a theft and abandoned the vehicle Wednesday.

He was scheduled to appear in Haverhill District Court for a probable cause hearing on weapons and ammunition charges Wednesday morning and was free on $5,000 bail.

Steve McCausland, spokesman for the Maine Department of Public Safety, confirmed the manhunt was over and added that more details would be provided later.

A report from the Portland Press Herald said a police were seen taking a shirtless Williams out of a wooded area by police near a red cape-style house.

The manhunt included at least 150 officers from local, county, state and federal agencies, who have been looking for 29-year-old Williams in buildings and heavily-wooded areas where he was believed to have been hiding, the Bangor Daily News reported.

On Friday, Gov. Paul LePage issued an emergency proclamation suspending all hunting in the search areas.

Police said they received 13 calls from the public overnight related to Williams’ possible whereabouts and hundreds of calls in response to a $20,000 reward offered by the FBI for information leading to Williams’ arrest. 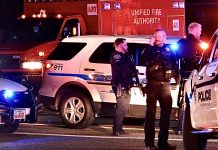