Esper made the remarks in Brussels, where NATO defense ministers were meeting. He said the troops would include mechanized forces in the eastern province of Deir al-Zour.

Esper didn’t provide further details on the numbers or types of troops that would be included. He said the United States would continue to pull troops from Syria.

On Thursday, President Donald Trump tweeted, “The Oil Fields discussed in my speech on Turkey/Kurds yesterday were held by ISIS until the United States took them over with the help of the Kurds. We will NEVER let a reconstituted ISIS have those fields!”

He also tweeted, “Perhaps it is time for the Kurds to start heading to the Oil Region!”

Esper called for an investigation into Turkish-backed militias who attacked Kurds.

During a visit to Afghanistan on Wednesday, Esper suggested the possibility of troops remaining to secure oil fields.

Trump claimed victory Wednesday and said sanctions against Turkey would be lifted. 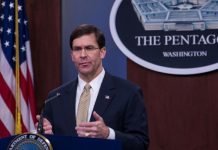 After treaty, Esper calls for immediate drawdown of troops in Afghanistan