Jan. 13 (UPI) — Mark Wahlberg tweeted Saturday that he is donating $1.5 million to the Time’s Up Legal Defense Fund.

“Over the last few days my reshoot fee for ‘All the Money in the World’ has become an important topic of conversation,” Wahlberg wrote in his post. “I 100 percent support the fight for fair pay and I’m donating the $1.5 million to the Time’s Up Legal Defense Fund in Michelle Williams‘ name.”

The Hollywood Reporter said Wahlberg and Williams’ talent agency — William Morris Endeavor — is also contributing $500,000 to the cause.

“The current conversation is a reminder that those of us in a position of influence have a responsibility to challenge inequities, including the gender wage gap,” WME said in a statement. “In recognition of the pay discrepancy on the ‘All the Money in the World’ reshoots, WME is donating an additional $500,000 to the Time’s Up Legal Defense Fund in Michelle Williams’ name, following our $1 million pledge to the organization earlier this month. It’s crucial that this conversation continues within our community and we are committed to being part of the solution.”

The donations were announced after the Screen Actors Guild-American Federation of Television and Radio Artists said it is investigating why Williams was paid 1 percent of what her male co-star earned for reshoots on “All the Money in the World.”

The actors reshot scenes after Christopher Plummer replaced Kevin Spacey, who was axed from the movie following allegations of sexual misconduct.

Williams previously told USA Today she was happy to accommodate the reshoot, saying: “They could have my salary, they could have my holiday, whatever they wanted. Because I appreciated so much that they were making this massive effort.” 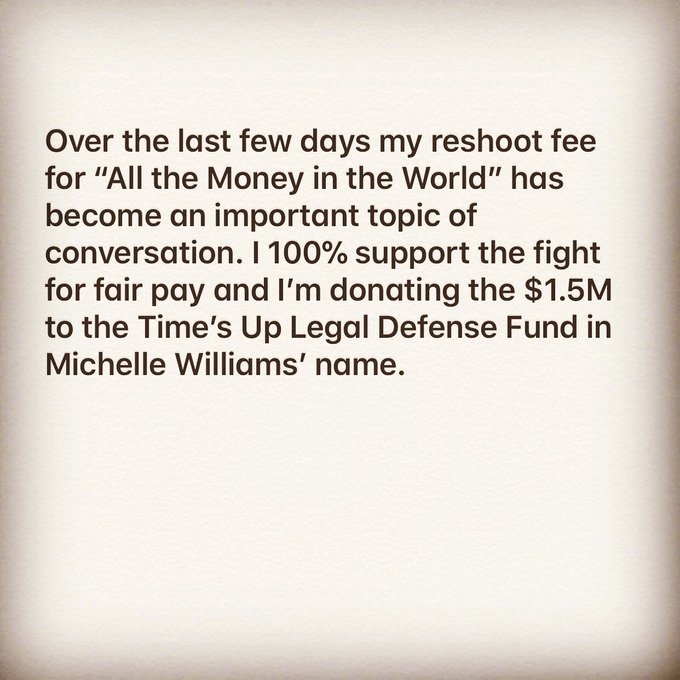