Jan. 29 (UPI) — A Maryland police officer was charged with murder on Tuesday after officials said he shot and killed a man who was handcuffed in the front seat of his police cruiser.

“I am unable to come to our community this evening and offer you a reasonable explanation for the events that occurred last night,” Stawinski said. “I have concluded that what happened last night was a crime.”

Green was handcuffed and placed in the front seat of the police vehicle while officers waited for a drug recognition expert to identify a substance that was removed from his car.

Police initially believed Green may have been under the influence of PCP, but Stawinski on Tuesday said the hallucinogenic drug does not appear to have been involved in the incident.

“A short time later, for reasons that are now at the center of the investigation, Green was shot seven times by the officer’s duty weapon,” police said.

Owen and the officer administered medical aid to Green after the shooting and he was transported to a hospital where he died.

Police said Owen’s vehicle did not have a transport partition that would allow officers to transport Green in the rear seat and that it was standard practice to place suspects in the front passenger seat.

Owen joined the force in 2009 and was involved in two earlier shootings, including one that was fatal.

The ACLU Maryland condemned the shooting and the lack of body camera footage of the incident in a statement on Tuesday.

“Once again, a Black man — William Green — has been killed needlessly by officers with the Prince George’s County Police Department, this time in Temple Hills, Md. Once again reports indicate that the unarmed man was in a disoriented state when he was shot and killed — after he was handcuffed and put into a patrol car,” the ACLU said.

State’s Attorney Aisha Braveboy said a grand jury will be convened in the case and promised a thorough investigation. 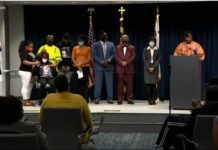