May 8 (UPI) — A gas company responsible for an explosion that caused dozens of house fires and killed at least one person last year reached an $80 million settlement with the affected communities Tuesday.

The explosion in September destroyed 80 structures and injured at least 25 people in the towns of Andover, Lawrence and North Andover.

Columbia Gas will pay 50 percent of the settlement to Lawrence, 30 percent to Andover and 20 percent to North Andover.

“We all wish the number was higher,” Lawrence Mayor Dan Rivera said at a news conference announcing the terms. “But if you take into account the time, value and money, and the cost of lengthy litigation … this is a good deal.”

The funds were expected to go toward repairing roads and sidewalks damaged by the blasts, and other losses and expenses incurred by the towns. Workers dug up some 50 miles of roadways to repair gas lines in the region.

Officials blamed the pressure inside the gas system’s pipes for setting off the fires and explosions. It was 12 times higher than it should have been. 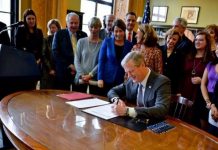