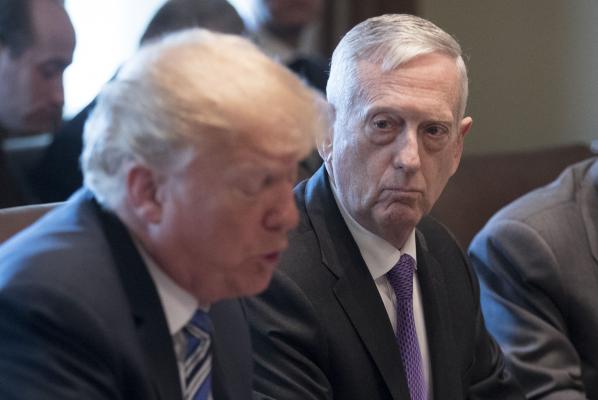 March 11 (UPI) — Defense Secretary James Mattis said Sunday it would be “very unwise” for Syrian government forces to use weaponized gas on its citizens.

Mattis, while flying on a military jet to Oman in the Middle East, noted to reporters there are numerous media reports about recent chlorine use but said he didn’t have clear evidence it happened.

Mattis said said “I think President Trump made that very clear early in his administration” about the attacks.

Rescue workers and opposition activists in Eastern Ghouta have reported that the Syrian government was recently using chlorine gas as part of the eight-year conflict but Damascas has denied the allegations.

Earlier this month, the United Nations High Commissioner for Human Rights said the airstrikes on Eastern Ghouta and shelling from the rebel-held zone into Damascus probably constitute war crimes.

Mattis said Moscow might be working with the Syrian government’s strikes on civilians.

“Either Russia is incompetent or in cahoots with Assad,” Mattis said. “There’s an awful lot of reports about chlorine gas use or about symptoms that could be resulting from chlorine gas.”

The United States did not say whether the jets dropped bombs, but it has accused Russia of playing a role in killing ivilians.

“They are Assad’s partner and whether the airplane dropping the bomb is a Russian airplane or a Syrian airplane, I’d prefer not to say right now,” Mattis said.

Mattis also was asked about a potential meeting between Trump and North Korea leader Kim Jong Un in May.

He said he didn’t want to talk about it “at all,” saying it’s up to the State Department and senior members of the White House to address questions about the potential meeting.

Mattis said media questions are “very valid,” but he’ll refrain because it is a diplomatically-led effort.

“When you get into a position like this, the potential for misunderstanding remains very high and grows higher,” Mattis said. “I want those who are actually … in the discussions to answer all media questions.”

On Thursday, Mattis, Secretary of State Rex Tillerson and other senior officials were with Trump when they met with South Korean national security adviser Chung Eui-yong, who relayed an invitation to Trump to meet the North Korea leader.