May 1 (UPI) — What traditionally has been a day to air labor grievances turned into a catchall political event for demonstrators worldwide on Monday.

Thousands of people protested across the United States on May Day, with the most popular target being President Donald Trump — who was opposed, resisted and mocked in effigy from coast to coast.

In Los Angeles, thousands gathered in many neighborhoods and marched to City Hall to hear a speech by Mayor Eric Garcetti.

“We have never seen anything at this level in terms of fear and anger in the Latino community,” League of United Latin American Citizens Director David Rodriguez said. “It’s important for people to show opposition to this administration. They are very harsh, they are family-splitting. … The policies are reprehensible.”

In New York City Monday, demonstrations against Trump ended with a rally at Foley Square.

“We all have family members and acquaintances who are affected, who don’t have their papers and are afraid,” New York limousine service owner Damian Rodriguez said. “We do not agree with what’s happening.”

Monday’s events served as exclamation points by believers in the “Resist” movement against Trump’s government. Many other May Day events were staged in cities like Miami, Milwaukee, St. Louis, Philadelphia, Chicago and San Francisco.

Worldwide, May 1 is known as International Workers’ Day — to highlight workers’ rights — but this year, with the new U.S. administration, many Americans saw it as another opportunity to again oppose who they view as an oppressive, divisive president.

“Trump has pitted the U.S. working class against migrant workers and refugees, and so we must strive to create bridges, not bans or walls, to connect our struggles together,” the International Migrants Alliance said in a call to action, calling Trump a “brazenly fascist, racist and anti-immigrant president.”

“Our presence in this country is being questioned by Donald Trump,” Fernanda Durand, of Casa in Action, told USA Today. “We are tired of being demonized and scapegoated. We’ve had enough.”

Casa in Action planned to draw 10,000 people in Washington, D.C., for immigrants’ rights with a march near the White House that ended with speeches from immigrants and elected officials. More than 200 immigrant-owned businesses were set to close in Washington. The rally was part of the Rise Up movement, which has organized more than 250 events in more than 200 cities.

In Philadelphia, a group called Philly We Rise marched throughout downtown Monday in support of “alternatives to the Trump agenda,” according to its website.

In the San Francisco Bay Area, dockworkers closed the Oakland waterfront for demonstrations and marches outside federal immigration offices, in front of the jail and along Bay Area Rapid Transit routes.

Since Trump took office on January 20, various marches have included several causes, ranging from the Women’s March on Washington and other cities to climate change awareness over the weekend.

“There’s really a sense that we’re in this together,” Erick Sanchez, a Washington-based organizer, said. “That an attack on one is an attack on all.”

“On Loyalty Day, we recognize and reaffirm our allegiance to the principles upon which our Nation is built,” Trump wrote in his proclamation last week. “We pledge our dedication to the United States of America and honor its unique heritage, reminding ourselves that we are one Nation, under God, made possible by those who have sacrificed to defend our liberty.

“This Loyalty Day, I call on all Americans to observe this day with appropriate ceremonies in our schools and other public places, including recitation of the Pledge of Allegiance to the Flag of the United States of America.”

Trump directed government buildings to display the U.S. flag and for schools to observe the holiday with ceremonies.

In Paris, thousands of demonstrators rallied to draw attention to political and social grievances as France is in the middle of electing a new leader. Many of the French events were geared to oppose far-right candidate Marine le Pen, who will face a runoff with centrist Emmanuel Macron this weekend.

“I am against Macron, but the most urgent thing is to stop [le Pen’s] Front National from winning,” one protester told Le Monde. “After the second round, we’ll fight against Macron.”

Some protests in Paris turned violent. Some police and protesters were injured after water cannons and other measures were taken to maintain order.

Originally, May Day was a pagan celebration from 2,000 years ago that celebrated the return of spring. In May 1886, it became international worker’s rights day for a strike in Chicago seeking the eight-hour workday. In 1891, the Second International, a worldwide socialist and communist parties organization, marked the fifth anniversary of the march in Chicago.

In 2006, roughly a million people, including nearly a half-million in Chicago, protested against federal legislation to make living in the United States without legal permission a felony. 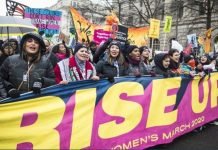