Aug. 26 (UPI) — Sen. John McCain, who died Saturday from brain cancer at age 81, will lie in state in Capitols in Arizona and Washington this week.

McCain, a U.S. senator from January 1987 until his death, previously served four years in the U.S. House. He will lie in state in the Capitol Rotunda, The New York Times reported. His funeral will take place at the Washington National Cathedral and burial for the former Naval officer and graduate of the U.S. Naval Academy will be in Annapolis, Md.

Former Presidents George W. Bush and Barack Obama have been asked to give eulogies at his funeral. McCain also asked Vice President Mike Pence to attend, but didn’t want President Donald Trump to be there, NBC News reported.

Bush, who was president for eight years when McCain was in the Senate, wrote in a statement: “Some lives are so vivid, it is difficult to imagine them ended. Some voices are so vibrant, it is hard to think of them stilled. John McCain was a man of deep conviction and a patriot of the highest order. He was a public servant in the finest traditions of our country. And to me, he was a friend whom I’ll deeply miss.”

Obama served in the Senate with McCain and ran for president against him in 2008.

“John McCain and I were members of different generations, came from completely different backgrounds, and competed at the highest level of politics,” Obama wrote. “But we shared, for all our differences, a fidelity to something higher — the ideals for which generations of Americans and immigrants alike have fought, marched, and sacrificed. We saw our political battles, even, as a privilege, something noble, an opportunity to serve as stewards of those high ideals at home, and to advance them around the world. We saw this country as a place where anything is possible — and citizenship as our patriotic obligation to ensure it forever remains that way.”

“Today we lost an American original,” Palin posted on Twitter. “Sen. John McCain was a maverick and a fighter, never afraid to stand for his beliefs. John never took the easy path in life — and through sacrifice and suffering he inspired others to serve something greater than self.”

Former President Bill Clinton and his wife, Hillary, who served in the Senate with McCain wrote: “Senator John McCain believed that every citizen has a responsibility to make something of the freedoms given by our Constitution, and from his heroic service in the Navy to his 35 years in Congress, he lived by his creed every day.”

They added: “He was a skilled, tough politician, as well as a trusted colleague alongside whom Hillary was honored to serve in the Senate. He frequently put partisanship aside to do what he thought was best for the country, and was never afraid to break the mold if it was the right thing to do. I will always be especially grateful for his leadership in our successful efforts to normalize relations with Vietnam.”

McCain will be the 13th former senator to lie in state in the Capitol Rotunda, according to the Architect of the Capitol.

“Nothing will overcome the loss of Senator McCain, but so that generations remember him I will be introducing a resolution to rename the Russell building after him,” the Democrat posted on Twitter.

Senate major leader Mitch McConnell, R-Ky., tweeted: “It’s an understatement to say the Senate will not be the same without our friend John. I will treasure the many memories we’ve shared together through the years.”

Sen. Lindsay Graham, R-S.C., mourned the loss of his colleague.

“America and Freedom have lost one of her greatest champions,” Graham posted on Twitter. “And I’ve lost one of my dearest friends and mentor.”

Trump, who frequently criticized McCain, posted on Twitter soon after the announcement of his death: “My deepest sympathies and respect go out to the family of Senator John McCain. Our hearts and prayers are with you!”

Flags were lowered at half-mast at the White House.

In Arizona, Gov. Doug Ducey ordered all flags to be lowered to half-staff.

Ducey, a Republican, will appoint a successor to McCain to serve through his term until 2020.

Arizona’s other senator, Republican Jeff Flake, has chosen not run for re-election this November.

Flake wrote a remembrance for McCain in The Washington Post titled, “I am grateful for John McCain.”

He opened the essay: “I couldn’t bring myself to write this piece until today. It’s not that I didn’t try. But something in my mind convinced my hands that if I put it off, somehow John McCain might be with us a little longer. I needed that. The country needed that.”

A call from Cindy, the senator’s wife, “late this week told me it was time.”

Cindy McCain posted on Twitter: “My heart is broken. I am so lucky to have lived the adventure of loving this incredible man for 38 years. He passed the way he lived, on his own terms, surrounded by the people he loved, in the the place he loved best.”

Family members were at his side when he died at home in Cornville, 100 miles north of Phoenix. On Friday, the family announced he would be discontinuing his brain cancer treatment.

“I was with my father at his end, and he was with me at my beginning,” daughter Meghan, among his seven children, wrote. “In the thirty-three years we shared together, he raised me, taught me, corrected me, comforted me, encouraged me, and supported me in all things. He taught me how to live. His love and his care, ever present, always unfailing, took me from a girl to a woman — and he showed me what it is to be a man.” 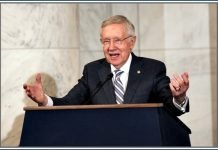