July 7 (UPI) — A second round of stimulus checks to residents could be part of Congress’s fourth rescue package to boost the economy during the coronavirus pandemic, U.S. Senate Majority Leader Mitch McConnell, R-Ky., said Monday.

In remarks at a Kentucky hospital, McConnell said Congress would be hammering out a new stimulus package in late July and that individual payments “could well be a part of it.”

“The question is where do we go from here?” McConnell asked. “We can’t shut the economy down again.”

Low-income residents in the service sector were hit hardest by the pandemic when jobs disappeared, McConnell said in a speech at Flaget Memorial Hospital in Bardstown, Ky.

The U.S. House passed a $3 trillion stimulus bill called the HEROES Act in May, which included money for state and local governments, and increased funding for the U.S. Postal Service.

The bill also included another $1,200 direct payment stimulus check. Republicans in the Senate vowed to challenge the bill.

But as the COVID-19 pandemic drags on, the economic pain appears to be more prolonged. Federal pandemic unemployment assistance is scheduled to end at the end of July.

President Donald Trump said Wednesday that he would support another direct round of stimulus checks. Trump extended the deadline Saturday for the Small Business Association’s Paycheck Protection Program to give employers more time to apply for funds.

The proposed congressional package would be the final rescue bailout, McConnell said Monday. The Senate will not resume discussion until after the July 4 recess.

“This will have to be the last rescue package, because we now have a debt the size of our economy for the first time since World War II. We cannot keep doing this,” he said. 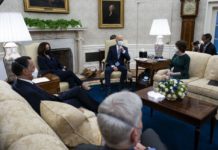