MEMPHIS, June 5 (UPI) — A Memphis police officer was killed and three others shot in the downtown area Saturday night.

Smith, an 18-year veteran of the department, was reportedly hit by the suspect’s vehicle as he tried to flee, causing his fatal injuries, CNN reported.

Police said two people were shot at Westy’s Restaurant and Bar on North Street and both were taken to the hospital in critical condition.

After the initial shooting, the suspect reportedly ran to a nearby Bass Pro Shop Pyramid and shot an employee. That employee was hospitalized and reported in non-critical condition.

Police said the suspect then took a vehicle and officers filled the streets in an attempt to locate it. The suspect later struck Smith as the officer was attempting to clear the area.

“We were waiting for a trolley, then all of a sudden we heard screaming and yelling down the street. We heard ‘get down,’ then in a matter of seconds there were police cars everywhere,” Memphis visitor Tim Snead said.

The suspect fled to the city’s famed entertainment district at Beale Street and Third Street, where the officer was hit by the suspect’s car. The suspect fled on foot, but was captured. He was taken to the hs hospital with non-life threatening injuries.

No charges have been filed yet against the unnamed suspect.

Smith, 46, is survived by a father, a fiancee, a son, and two daughters.

“My family joins all of Memphis in mourning the loss of Officer Verdell Smith, who gave his life in service to our city,” Memphis Mayor Jim Strickland said in a statement.

“I call on every Memphian to remember Officer Smith’s family in prayer and reflection today and in the coming days — and to be grateful for the dangerous, important work our men and women of MPD perform every day.”

The Memphis Police Department also put out a tweet saying that losing Smith, an officer and a friend, brought sadness to the entire department. 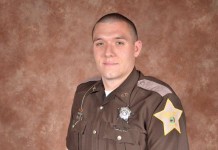 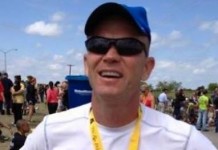