Oct. 14 (UPI) — The death toll from Hurricane Michael rose to at least 18 people Sunday as searches continued for missing people in areas affected by the storm.

A sixth death in Virginia related to the storm was confirmed in Charlotte County, the Virginia Department of Emergency Management said.

To date, eight people in Florida, three people in North Carolina and a child in Georgia have also been reported dead.

“Everybody just needs to help each other right now,” Scott said. “You feel sorry for people. They might have lost their house. They worry about their kids getting into school. You know, people don’t sit and have a whole bunch of extra money in the bank just waiting for a disaster.”

Scott also said Saturday evening that 142,000 gallons of water and nearly 174,000 ready-to-eat meals were delivered to affected communities and 15 shelters open across the state, while 11 counties are eligible for individual assistance from the Federal Emergency Management Agency.

Mexico Beach Police Chief Anthony Kelly said it may take a year or longer to rebuild the area after much of its infrastructure was destroyed by the storm.

A fatal shooting was also reported in Panama City, as authorities said they were investigating.

The Gulf institution and annex, the Gulf Forestry Camp, and Panama City Work Release Center were also closed while damage assessments were being made.

Officials in Georgia also said they had received reports that 84 chicken houses were destroyed in the storm, while pecan, cotton, vegetable and peanut crops were also damaged. 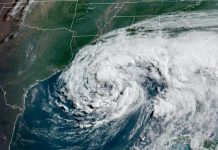