On Sunday, U.S. District Judge Mark Goldsmith in Ohio ordered that the recount begin at noon Monday. After the counting began, the state’s Republican Party filed its appeal.

“This is a Michigan issue, and should be handled by the Michigan court system,” state Republican Party Chair Ronna Romney McDaniel said in a statement. “Michigan courts should decide Michigan election law.”

Stein’s lawyers made an emergency request objecting to a two-day waiting period that would have pushed the recount back to late Tuesday at the earliest.

Goldsmith said the wait violates voting rights and Stein showed a “a credible threat that the recount, if delayed, would not be completed” by Dec. 13. That is the “safe harbor” deadline to guarantee Michigan’s 16 electoral votes are counted when the electoral college meets six days later.

“The fundamental right invoked by plaintiffs — the right to vote, and to have that vote conducted fairly and counted accurately — is the bedrock of our nation,” Goldsmith wrote. “Without elections that are conducted fairly — and perceived to be fairly conducted — public confidence in our political institutions will swiftly erode.”

Goldsmith was appointed to the federal bench by President Barack Obama in 2010.

Mark Brewer, an attorney representing Stein, told the Detroit Free Press “this is a victory for the voters of Michigan.”

The logistics of a statewide recount are so great, “it’s kind of like Eisenhower invading Europe on D-Day,” attorney Gary Gordon, representing the Michigan Republican Party, told the judge. “It’s a logistical nightmare.”

Stein is seeking recounts in Michigan, Wisconsin and Pennsylvania, where President-elect Donald Trump leads over Hillary Clinton. If recounts resulted in all three traditional Democratic states switching to Clinton, she would win the presidency.

On Friday, the Michigan Board of Canvassers tied 2-2 on Trump’s objection to Stein’s recount request, meaning the recount would proceed. But under Michigan law, state officials must wait two business days after hearing objections to a recount petition before they can start counting.

Stein led a demonstration Monday at Trump Tower in New York City to highlight the recount process — publicly questioning why so many Republicans, including Trump’s campaign, are actively fighting the notion of a recount.

“We are here to assure Donald Trump that there is nothing to be afraid of,” Stein said at the rally. “If you believe in democracy, if you believe in the credibility of your victory, put down your arms, end your bureaucratic obstruction, end your intimidation.” 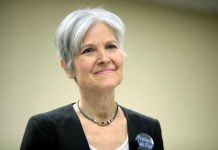 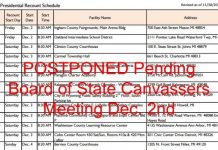