LANSING, Mich., April 19 (UPI) — The tap water in the city of Flint is so safe, Michigan Gov. Rick Snyder says he’ll drink it for a month to demonstrate his confidence.

Months after the contaminated water crisis began in the city, Snyder said Monday that he and his wife both plan to use it for the next 30 days.

“I completely understand why some Flint residents are hesitant to drink the water and I am hopeful I can alleviate some of the skepticism and mistrust by putting words to action,” he said. “Flint residents made it clear that they would like to see me personally drink the water, so today I am fulfilling that request. And I will continue drinking Flint water at work and at home for at least 30 days.”

Snyder and the first lady, who live in Lansing, have collected a small supply of filtered tap water from their visits to Flint and will use it to drink and cook with. As the supply dwindles, they will collect more.

Michigan Gov. Rick Snyder fills a gallon jug with tap water from the home of a Flint resident during a visit. Snyder said Monday that he will personally drink the city’s tap water for a month to demonstrate his confidence that it is safe, as experts have promised. Photo courtesy Gov. Rick Snyder

The governor’s pledge is a response to challenges last week that he personally use the water in Flint, where the water supply became contaminated with lead from aging pipes carrying water from the Flint River — the city’s main source for two years.

As officials work to implement safer infrastructure, experts say Flint’s tap water is safe to drink as long as a proper filter is used. Residents, though, are still hesitant.

“Protective coating is being restored to Flint’s pipes, which is an important measure needed to provide quality water until lead pipes can be replaced,” Snyder’s office said in a news release. 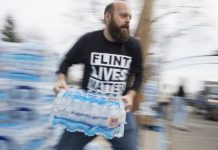