Dec. 26 (UPI) — Minneapolis police have removed a memorial created by white nationalists to honor Australian Justine Damond, a woman who was shot and killed last summer by a Somali-American officer.

The memorial was created by Identity Evropa, a California-based white nationalist group, who said they created it after a judge ruled there wasn’t enough evidence to bring charges in Damond’s death.

Damond was shot and killed by officer Mohamed Noor after she called to report an assault in an alley behind her home.

Police removed the memorial, but left remnants of the candles.

“I condemn the perpetrators and their tactics in the strongest possible terms,” Minneapolis Mayor-elect Jacob Frey said in a statement. “Identity Evropa and those who share their values have no place in our city. Hate has no place in Minneapolis. Period.”

“We cannot allow any memorial and anything like that to be put up at that location,” Elder said.

The white nationalist group tweeted that the Minneapolis “elites” needed to “get their priorities in check.”

Identity Evropa has chanted, “you will not replace us,” at rallies and was involved in a march in Charlottesville, Va., that turned violent and saw one demonstrator killed. 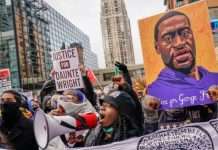