ST. CLOUD, Minn., Oct. 18 (UPI) — Authorities say a sheriff’s investigator was killed with his own service pistol early Sunday while struggling with a suspect at a hospital in St. Cloud, Minn.

Sandberg, 60, was monitoring Hammond, a suspect in a domestic incident who was seeking treatment at the hospital. Hammond had not been arrested and was not handcuffed, BCA Superintendent Drew Evans told the St. Cloud Times.

No other patients, hospital personnel or law enforcement officers were injured in the incident, which was contained to the hospital room.

Hammond had been convicted of multiple felonies in Aitkin County from 1989 to 1990, including for burglary, terroristic threats and escaping from custody. Evans told the St. Cloud Times more information on his death would be available after an autopsy. 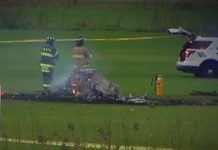