Officials lost contact with the aircraft after the pilot called a mayday about 9 minutes after takeoff. Authorities searched for the helicopter for hours before scanner traffic indicated a Minnesota State Patrol trooper found it around 4 p.m. near Pearl Lake.

The helicopter took off just before 2 p.m. with three people aboard.

“We do not have contact with the helicopter but we do not quite yet know what the situation is,” Minnesota National Guard Master Sgt. Blair Heusdens told the St. Cloud Times. “We’re working to figure it out.”

The Saint Paul Fire Department joined the search for the missing aircraft and the Minnesota State Patrol assisted with its own helicopter.

Law enforcement attempted to use the passengers’ cellphones to track the location of the helicopter.

Minnesota Gov. Tim Walz rescheduled a tree-lighting ceremony in response to the incident.

“Governor Walz is in communication with the Minnesota National Guard and will be at the Capitol to monitor the developing situation,” a release from his office said. 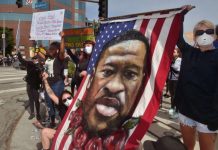