Aug. 26 (UPI) — Emmerson Mnangagwa, vowing a “brighter tomorrow” for Zimbabwe, was sworn in as the African nation’s president on Sunday.

On Friday, the Constitutional Court confirmed Mnangagwa as president, rejecting a challenge by his opponent in the July 30 ballot, opposition leader Nelson Chamisa. Mnangagwa had secured 50.8 percent of the votes needed to avoid a runoff.

The court said his opponent failed to prove its allegations of voter fraud during the election.

Mnangagwa was appointed after Robert Mugabe was forced out by the military in November last year after 30 years in power.

Thousands of citizens and foreign leaders gathered at Harare’s national stadium for the swearing-in of Mnangagwa.

He was sworn in by Chief Justice Luke Malaba, who had dismissed Chamisa’s petition.

Mnangagwa, from the Zanu-PF party of Mugabe, said will be a “listening president.”

“The Zimbabwe we want is a shared one and transcends party lines,” he said.

“The creation of jobs, jobs and more jobs will be at the core of our policies,” he said. 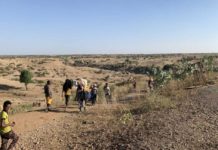