“The president and I believe that it should be tied to the Harvey funding, that our first priority is to make sure that the state [Texas] gets money,” he said in an interview on Fox News Sunday. “It is critical and to do that we need to make sure we raise the debt limit.”

If Congress approves the relief but additional money is not borrowed, “we’re not going to be able to get that money to the state.”

“So we need to put politics aside and we’re going to be urging Congress to get both of those things done as quickly as they can,” Mnuchin said.

Last month, the Treasury Department said the U.S. government will have enough funds to continue operations only through Sept. 29.

The U.S. government hit the $19.8 trillion debt limit in March and the Treasury Department has been using accounting maneuvers to free up borrowing.

Senate leader Roy Blunt, R-Mo., said Sunday on NBC’s Meet the Press that Harvey aid and the debt ceiling increase is “something that will be decided in the next few days, I expect.”

Blunt said relief money should be given out multiple times on an as-needed basis rather than in a large lump sum as was done for Hurricane Sandy in 2002.

Trump has asked Congress for $7.85 billion in aid for Harvey victims.

Since 1960, Congress has acted 78 separate times to permanently raise, temporarily extend or revise the definition of the debt limit.

The Freedom Caucus, a group of conservatives in the House of Representatives, doesn’t want the two linked.

“To use that [hurricane aid] as a vehicle to get people to vote for a debt ceiling is not appropriate,” the group’s chair, Rep. Mark Meadows, R-N.C., said last week to The Washington Post. 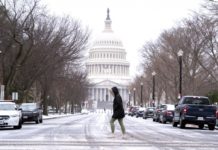