The fires and Palestinian demonstrations Friday along the Gaza border followed an agreement by Israel to expand the Gaza fishing zone and restart fuel deliveries to the region. Hamas, in exchange, promised to keep its protests against Israel peaceful.

“Hamas members thanked Benjamin Netanyahu for the reprieves he’s given them as part of a tendentious submission agreement from us, and have sent residents of the State of Israel a huge cluster of balloons with an explosive charge,” Liberman said on Facebook.

Human rights groups had condemned Israeli stopping fuel shipments to Gaza as a collective punishment against Palestinians as a whole, instead of targeting the perpetrators. They similarly criticized the maritime blockade as punishing fishermen for the balloon attack. 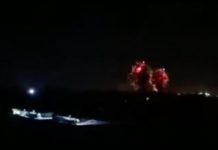