April 12 (UPI) — Since the fighting in Ukraine began almost two months ago, more than half of the country’s child population has been displaced, according to the United Nations children’s fund.

The fund, or UNICEF, said that the mass exodus of civilians from Ukraine since Feb. 24 includes hundreds of thousands of children. The United Nations has said that more than 4 million Ukrainians have fled their homeland over the past seven weeks to escape the fighting.

“Over the course of 10 days, I visited Lviv in the west, as well as Vinnystria in central Ukraine, and Dnipro and Zaporizhzhia in the southeast — all to gauge the evolving humanitarian conditions on the ground so that we can adapt UNICEF’s response to meet the growing needs of children and their families,” Fontaine said in a statement.

“Nearly three million children in Ukraine need humanitarian assistance. More than 4.5 million people, over 90% of whom are women and children, have crossed into neighboring countries as refugees.”

Fontaine added that it’s estimated that more than 7 million people are now displaced, but still in Ukraine — and more than half of all displaced Ukrainian households involve children.

According to U.N. figures so far, almost 150 children have been killed by the fighting and more than 200 have been injured.

“The true figures are most certainly much higher given the scale of attacks,” Fontaine added. “And they have been hurt in the very places where they should be safest — their homes, emergency shelters, even hospitals.”

Fontaine said fighting has been so intense in some areas — particularly in the east region controlled by pro-Russia separatists — that families are constantly risking their lives to get their children out of harm’s way.

He pointed to the missile strike last week on a crowded train station in Kramatorsk that killed dozens of civilians. There, hundreds of families were waiting for trains out of the area. Russian forces have also targeted civilian populations in other parts of the country — including a children’s hospital in Mariupol a month ago.

“They should not have to do this,” Fontaine noted. “As we all saw, [the] Kramatorsk train station in Donetsk Oblast was attacked on April 8, killing dozens of civilians, including children, many of whom were seeking to evacuate to relatively safer areas.” 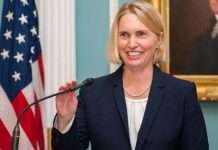