According to legal filings, the zoo rented the raccoon, Thomas, to the video firm Art-Msk in August for what was supposed to be a “normal” photo shoot. When Thomas was returned, the zoo owners said he was traumatized and had become preoccupied with women’s breasts. When zoo owners saw the ad footage online, they realized Thomas had been used as a prop by a female model, who held him up to obscure her naked torso.

Zoo official Viktor Kiryukhin accused the directors of giving Thomas treats to lure him closer to the model’s breasts, thereby training him to conflate women’s breasts with food. He said Thomas’ behavior since being returned has unnerved female zoo employees.

Zoo officials demanded the images be removed from the Internet, and filed suit after Art-Msk refused.

The studio also implied his preoccupation with the female anatomy existed before they rented him, saying he made off with a bra and damaged the garment. 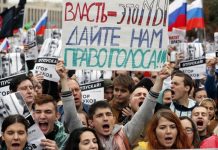