Feb. 26 (UPI) — A mother and daughter have been arrested for allegedly killing five family members in their Bucks County, Pa., apartment, authorities said.

“This is a terrible tragedy. I just spoke with the family of the five deceased and they are all heartbroken,” Weintraub said.

The bodies were discovered in the bedroom of a Morrisville, Bucks County, apartment at around 4 p.m. Monday following a wellness check, The Inquirer reported.

The cause of death is still under investigation and the motive is still unknown, Weintraub said.

The two suspects were initially taken to a hospital before entering police custody, Weintraub said.

Police are looking for Jamilla’s 17-year-old son, Joshua Campbell, to ensure his safety. 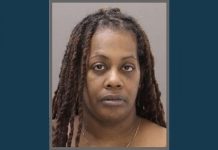