DURHAM, N.C., Oct. 26 (UPI) — At least one North Carolina Central University student was injured in an on-campus shooting as police launch a manhunt for the gunman.

NCCU, located in Durham, N.C., released an “active shooter” alert shortly after 11 p.m. and the school was momentarily placed on lockdown. Durham police responded to assist campus police in the shooting, which took place near the school’s football stadium.

The university released a statement about the incident:

“The North Carolina Central University campus was placed on lockdown following a shooting that occurred around 11 p.m. on October 25, 2015, off Lawson Street near Alston Avenue. The NCCU Police Department responded to the incident and remains on scene investigating the situation,” NCCU wrote. “One individual, who is a student, was transported to a local hospital with non-life threatening injuries. An ‘all clear’ was issued at 11:50 p.m. and the campus lockdown was lifted.”

Police urged anyone with information relating to the incident to contact authorities. 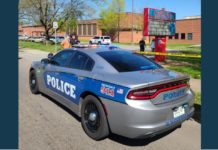