Aug. 4 (UPI) — A New Jersey federal judge whose son was shot and killed and whose husband was injured by a disgruntled attorney pleaded for more protection for members of the federal judiciary Monday.

“[Federal judges] are forced to live in fear for our lives because personal information like our home addresses can easily be obtained by anyone seeking to do us or our families harm,” said Judge Esther Salas in an emotional video statement.

“My son’s death cannot be in vain … The free flow of information on the internet allowed this sick and depraved human being to find all our personal information and target us.”

Den Hollander was found dead of a self-inflicted gunshot wound a day later in New York. Salas referred to Den Hollander in her statement as a “madman” and a “monster.”

“My family has experienced a pain that no one should ever have to endure. And I am here asking everyone to help me ensure that no one ever has to experience this kind of pain,” Salas said Monday.

“We may not be able to stop something like this from happening again, but we can make it hard for those who target us to track us down.”

Salas said that Sunday evening, she and her son were cleaning up in the basement after a weekend birthday party for Daniel when the doorbell rang and Daniel rushed upstairs to answer.

“Before I could say a word, [Daniel] sprinted upstairs. Within seconds, I heard the sound of bullets and someone screaming, ‘No!’,” Salas said.

“I later learned that this monster, who had a FedEx package in his hand, opened fire, but Daniel being Daniel, protected his father and he took the shooter’s first bullet directly to the chest.

“The monster then turned his attention to my husband and began to shoot at my husband, one shot after another. Mark was shot three times: one bullet entered his right chest, the other his left abdomen, and the last one in the right forearm,” Salas said.

She thanked medical staff at Robert Woods Johnson University Hospital in New Brunswick for the care her husband received.

Salas said that federal judges are required to make decisions that may anger some people.

“As federal judges, we understand that our decisions will be scrutinized, and some may disagree strongly with our rulings. We know that our job requires us to make tough calls, and sometimes those calls can leave people angry and upset,” she said.

But easily available information on the internet leaves judges exposed.

“The monster knew where I lived, what church we attended and had a complete dossier on me and my family,” Salas said in the video.

Police said in Den Hollander’s car they found files with information about Salas and another woman, an oncologist who had treated Den Hollander for cancer, the New York Times reported.

Den Hollander described himself on various online channels as an “anti-feminist lawyer” and belonged to a men’s rights movement along with Angelucci.

Den Hollander previously appeared before Judge Salas on a case where he argued on behalf of a woman and her daughter who tried to register for the U.S. Selective Service. Salas ruled against Den Hollander’s motions in the case, but allowed other parts of the case to continue.

On Den Hollander’s website, now removed, the lawyer posted anti-feminist manifestos, including a rant where he disparaged Salas personally, saying he disliked working with female judges of Latin American descent because he claimed they were “driven by an inferiority complex.”

“We need to identify a solution that keeps the lives of federal judges private,” Salas said Monday. “This is a matter of life and death and we can’t just sit back and wait for another tragedy to strike.” 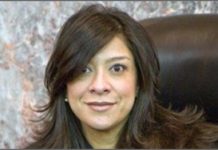