March 30 (UPI) — The number of confirmed coronavirus cases in New York, the U.S. epicenter of the crisis, has surpassed 66,000 with the addition of 7,000 new cases, Gov. Andrew Cuomo said in an update Monday.

Cuomo, speaking to reporters at a makeshift hospital in the Jacob Javits Convention Center, said the majority of the new cases were recorded in New York City, where more than 36,000 patients have so far tested positive.

New York’s death toll rose to more than 1,200, he added, and the number of patients hospitalized jumped by 12 percent.

There have now been more than 2,700 COVID-19 deaths in the United States and the total U.S. caseload is near 150,000, according to a count by experts at Johns Hopkins University.

Cuomo waited to stage his daily briefing until after a Navy hospital ship docked in Manhattan on Monday to help alleviate crowding in New York City hospitals. The USNS Comfort adds 1,000 more beds — 750 of which will be used immediately, Mayor Bill de Blasio said.

Whitmer said her administration must spend to save lives, even though the state faces an expected decline in tax revenues.

“My number one priority is protecting Michiganders’ health and safety,” she said. “However, we must also work to prepare our state for the impact the COVID-19 crisis will have on our economy and the state budget. These executive orders will help us do just that.”

In Florida, Gov. Ron DeSantis issued a stay-home order for the populous southeastern part of the state, which includes Miami-Dade, Broward, Palm Beach and Monroe counties.

In Louisiana, the state’s caseload and death toll grew Monday. Among those hospitalized was legendary New Orleans Saints placekicker Tom Dempsey, who also has Alzheimer’s disease and dementia.

Dempsey, 73, who was born without toes on his right foot, became famous for converting a 63-yard field goal to lift the Saints to a 19-17 win over the Detroit Lions on Nov. 8, 1970. His daughter said he picked up the disease while living at a senior center in New Orleans.

In Maryland, Gov. Larry Hogan issued a stay-at-home order that bars residents from traveling outside the state and riding public transportation.

“This is a rapidly escalating emergency situation,” the governor said, just days after the coronavirus killed dozens at a senior center in Mount Airy, Md.

Virginia Gov. Ralph Northam also issued a stay-at-home order for the state, ordering all Virginians to stay home except in “extremely limited circumstances” including travel to seek medical attention, work, care for family or household members and obtain groceries, prescriptions or other goods and services.

The order also directs all Virginia institutions of higher education to halt in-person classes and instruction and closed private campgrounds as well as beaches for activities other than fishing and exercise.

“We are in a public health crisis and we need everyone to take this seriously and act responsibly,” Northam said. “Our message to Virginians is clear: stay home. We know this virus spreads primarily through human-to-human contact and that’s why it’s so important that people follow this order and practice social distancing.”

In Tennessee, 33 staff members of a Nashville nursing home were in home isolation Monday after testing positive, state officials said. Twenty-three residents at the home were hospitalized Friday.

In Washington, the Transportation Security Administration said more than 50 screening agents have tested positive over the last two weeks. Twenty-two other agents, who have had relatively limited interaction with travelers, have also tested positive, the agency said. 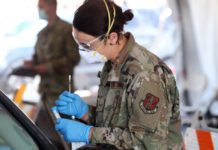