July 6 (UPI) — Nashville police officers performing an investigation before a Fourth of July fireworks display were forced to seek shelter when the show began while they were still in the “blast zone,” authorities said Monday.

Several members of the Metro Nashville Police SWAT team were investigating a report of people atop a building that had supposedly been cleared as fireworks were set to begin Sunday night for the city’s “Let Freedom Sing!” event, police said in an issued statement.

The display, however, began while the officers were still inside the building and a helicopter hovered overhead. Despite being in the blast zone, the SWAT team escaped uninjured after taking refuge on the lower floor of the building.

The Fire Department, which was controlling the fireworks event, told MNPD it did not know officers were sent inside to clear the building.

The officers were responding to reports of people at the top of Bridge Tower, where the fireworks were staged, after a helicopter confirmed the sighting, Nashville Police spokesman Don Aaron said in the statement.

The situation appears to have been a miscommunication between the fire and police departments.

“Without going through command and without checking with MNPD to ensure our personnel were out of the building, the message was relayed to start the fireworks show,” Aaron said.

Both departments said they are launching an investigation into why the show started before the SWAT team had evacuated the danger zone.

Some 350,000 people were in attendance for the 45-minute show featuring country music star Brad Paisley. It was the first official city event since the COVID-19 pandemic.

“In the communication chain between fire and the police department, there was a missing link,” he said. “One side thought it was clear and the other side didn’t get that message.” 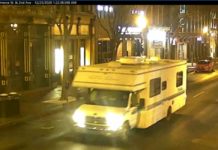