June 19 (UPI) — The National Domestic Hotline received more calls or other contacts in 2018 than it has in any other year since its inception in 1996.

The hotline said it received 573,670 contacts in 2018, an increase of 36 percent over 2017. Specific visits to TheHotline.org and loveisrespect.org websites increased 48 percent.

Hotline CEO Katie Ray-Jones attributed the increase in contacts to a greater focus on relationship violence in media and pop culture.

“The report shows that together, The Hotline and loveisrespect [website] received four times the increase in media coverage in 2018 as compared to 2017,” Ray-Jones said. “With greater awareness of this issue that affects one in four women and one in seven men, we’re seeing more people affected by abuse taking brave steps forward and seeking support.

“It’s important we continue to shine a light on domestic violence. We all play a role in ending it.” 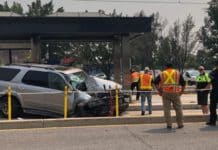